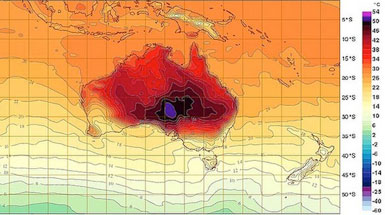 Our ozone layer is evaporating, the atmosphere’s CO2 content is increasing, sea levels are rising and the ice caps are melting. All of this is resulting in an escalating and exponentially increasing ‘heating’ of the entire planet that is putting us all in danger and which threatens to leave many of species of Earth extinct.

So with all this going on, you’d expect temperatures around the world to be at an all time high right? Read on to get the scoop on what’s really going on with our weather…

It’s Not That Simple

First, it’s important to recognize that it’s not really quite that simple. While climate change is often referred to as ‘global warming’, this warming is not in fact… global. For instance, if you were to visit the UK you’d find that the temperatures there are actually lower than they have been in the past. This is due to the melting of the ice caps, which are entering the gulf stream and the Atlantic ocean. Colder water means colder winds and generally a cold atmosphere in the UK – but it doesn’t mean that global warming is any less of a threat.

Another thing to consider is that when we say ‘record temperatures’, this actually only refers to temperatures on record. Of course we have no way to compare the weather now to the weather millions of years ago, but suffice to say that it is believed the climate was much hotter in prehistoric times when Dinosaurs roamed the planet (the Jurassic and Triassic periods for instance). This of course has led to a fair amount of controversy, but that’s for another article…

Some sceptics are also claiming that global warming has stopped, with no signs of an increase for the last 16 years. This generally however is based on a misreading of the statistics which fails to take into account a range of natural causes such as volcanic eruptions and ocean cycles. Once you remove the natural elements, you have a much clearer upward trajectory for the overall global temperature with a few fluctuations due to weather.

Enough speculation though, let’s take a look at the facts. First of all, it’s interesting to note that the Earth’s overall average surface temperature has risen between 1906 and 2005 by 0.18 degrees Celsius. This looks high, but the rise was over double that for the second half of the period between 200-2005. Prior to 1850, Climate Proxies suggest that the temperature had been relatively stable for about two thousand years (other than small fluctuations such as the ‘medieval warm period’ and ‘little ice age’). 2010 according to NASA was tied with 2005 as the warmest year since reliable measurement began (1988 is just behind by a few hundredths of a degree but this was affected by the ENSO – a band of particularly warm ocean water which forms on occasion around the West coast of South America). 2012 was the 3rd warmest summer globally on record, and was one of the hottest specifically for the US as well. This hot American weather also contributed to a record breaking drought parching 61% of the nation, and 9.2 million acres of forest being lost to wildfires marking it one of the most ‘extreme’ years ever for weather. Of course hurricane Sandy was also an example of extreme weather, but was only one of 11 natural disasters resulting in $1 billion of damages. This is the true cost of global warming.

If you compare the ten most recent summers with those between 1951-1980, then you’ll find that 8 out of 10 in the US have been warmer. This is the same in Japan, while in Europe you get an even more alarming 10 out of 10 suggesting a definite trend toward warmer weather.

In Australia a lot of publicity has surrounded the addition of a new ‘colour’ (a kind of lilac…) to the Bureau of Meteorology temperature maps in order to deal with record temperatures after the 7th January 2013 saw the hottest average day across the country on record at 40.3 degrees Celsius. The weather bureau announced that records were being broken across Australia and that wildfires were a serious problem as a result.

The Warmest Summers on Record

The national warmest summers on record however don’t tend to have much to do with global warming at all and instead tend to be the result of random weather fluctuations. In the UK the hottest summer on record was the result of a heat wave in 1976, while in the US it was the great heat wave of 1936. Of course measuring the hottest days and moments is very difficult and also once again subject to many confounding factors. Generally though the hottest conditions ever recorded on Earth is thought to be Death Valley in 1913 which reached  56.7 degrees. There’s a fun fact for you!

Generally then it’s fair to say that temperatures are increasing all the time, and many new records are being broken all the time, even if the hottest summers were 70-100 years ago. Fluctuations in the planet’s temperature are down to countless factors from the movements of the ocean to the eruption of volcanoes, but crucially the general trend is still going up. Things are still getting hotter and we need to do something about it…