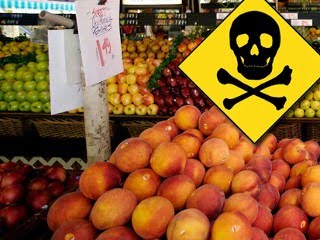 In a bid to go green and to stay healthy you may well be interested in avoiding pesticides. We all know that pesticides are bad news for our health and for the environment: something designed to kill insects is of course not likely to be particularly good for us either or for other animals once it gets into the food chain (there are many conditions that have been ‘linked’ to pesticides though you mustn’t blow this out of proportion – they aren’t going to kill anyone. Then there’s the simple fact that we need insects too. They are part of the food chain as well and part of the eco system, so if they fall in number then you know that that’s going to have to even out somewhere – fewer insects could very well mean more weeds for instance or fewer hedgehogs. That’s just how things work.

So with that in mind, why do fruits and vegetables have so many pesticides in the first place? Let’s take a look at the answers…

Not All Pesticides Are Bad

The first thing to bear in mind is that not all pesticides are bad news – in fact a ‘pesticide’ can even be something found in nature (like said hedgehogs). All a pesticide really is is something that’s used to keep insects off of crops and vegetables by either scaring them off or by killing them (a scarecrow could be a birdicide…).

The pesticides that people worry about are ‘synthetic’ pesticides which means that they’re concocted in a lab somewhere rather than found in nature. These are chemicals or tablets that are scattered around the crops and designed to kill off the nearby insects and these are the things that may be toxic.

Again though the question then is – why do farmers still use synthetic pesticides? Well the answer to that is simply that they’re more effective at getting rid of pests and thus better at protecting crops. In turn that makes them actually better for the environment in some ways – because more efficient farming means more sustainable farming which in turn means that less land and energy needs to be tied up in the production of crops. Of course this also improves the farmers’ profit margins, which is the real reason they still use synthetic pesticides, but they do have benefits for the environment too. And in fact by killing off certain bugs synthetic pesticides can even help to prevent certain diseases. At any rate the difference is minor – with researchers at Stanford University failing to notice any real differences between those who chose organic over regular fruit and veg.

So What Do You Do?

So really there’s a bit of a balancing act to consider here. While organic fruit and veg might potentially be harmful in some ways to the environment and to our health, it also has positives and those negatives are very minor – that being why pesticides haven’t been banned. Fortunately you have the choice, it’s entirely up to you whether you want to buy organic or not, but if you don’t you can always just give your veg a good scrub and a wash before you eat it…