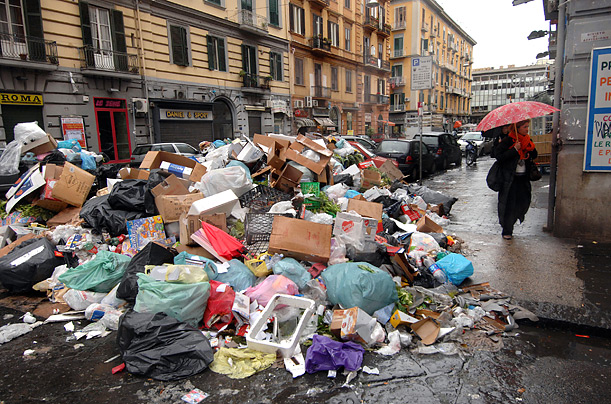 When it comes to being good to our planet and combating global warming/the energy crisis/various other crises, one of the main things that we are told to do is recycle. This is a basic fundamental of living in a green way, and it’s something that many of us will practice diligently even if we aren’t interested in environmentalism.

But does it really help? Can the simple act of throwing your cardboard and plastic into a different bin really change anything? Here we will look at recycling in a little more depth and examine whether it really is any use, or whether it’s in fact just a scam to get more money out of us.

What Happens to Your Recycling?

So what happens when you throw something in the recycling instead of the litter? Well first of all it is collected into a particular compartment in a lorry/truck and then it is normally taken to the MRF (materials recovery facility) to be sorted. Here someone has the unpleasant job of separating the materials by hand or using a machine, before sending them off to various manufacturers who can melt them down and turn them into new products.

Thanks to this you can then choose to buy a range of products from the stores that will say ‘made from 100% recycled materials’ or the like, and that will mean that the materials cost a lot less energy to manufacture and that a lot fewer raw materials will have been used.

But that’s not the only advantage of recycling. Not only does recycling mean that big companies don’t have to drill for as much oil, create new plastics or chop down more trees; but it also means that a lot less plastic and glass will be buried in landfill sites. This is good news because these landfills produce a lot of noxious emissions including carbon and methane, pollute the local ecosystem and take up highly valuable space. And overall it all seems to be working – in the UK where there is a big push for recycling, the process has been credited with a 10% reduction in carbon emissions which is roughly equivalent to taking 3.5 million cars off the road.

Of course though it’s never that simple, and there are still controversies surrounding recycling no matter who you ask. Of course all this recycling doesn’t just benefit the ecosystem, but it also benefits companies who can recycle those materials into goods with lower overheads (and a handy marketing slant), as well as the councils who can sell those items on for a lot of money. Don’t get too wrapped up in this though (no pun intended), as money going to the council benefits you too, while money going to the private sector improves the economy.

But suffice to say that there is an ulterior motive here – which is fine so long as our efforts are actually benefiting the planet too. So are they?

One of the things that has caused concern is the switch in much of America to ‘single stream collection’ which has occurred in many of America’s kerbside collection programs. This means that you no-longer have to sort glass from plastic, so the question is whether or not they’re still going to good use. Well for the most part the answer is yes, and those mechanical sorting machines are very efficient at sorting many different materials and then presenting them in a useable form such as paper and glass. Plastic however is more difficult as there are so many different ‘types’ of plastic which need to be handled differently. This means that a relatively low percentage of plastic in the US is recovered (it was only 6% a few years back), and this percentage is only really made up of PET and HDPE plastic. PET is often used in manufacturing bottles, but unfortunately the sorting process means it is often ‘down-cycled’ for use in cheaper products such as plastic lumber (a replacement for wood) and carpets – which eventually tend to end up in landfills. The same goes for plastics that go into computers and toys – how many of you recycle your kids’ used Transformer toys or the cases from your old phones?

In Europe and Japan a ‘take back’ law exists which obligates electronics manufacturers to recycle, but no such law exists in the US. This further complicates matters because it means that many sorting companies such as MBA Polymers struggle to find buyers for their recycled materials in America. Actually though a lot of our recycled materials end up going to China, which is also controversial.

Part of the reason that shipping recyclables to China is controversial is that we then lose track of those materials and have no guarantee that they won’t then end up in landfills due to loser regulations. China has also been plagued by illegal-waste imports, where small companies often around the poorer coastal regions will dismantle and recycle any plastic materials they find with little regard for their own safety or the protection of the environment. Of course you also need to consider the cost that shipping those materials will have for the environment. There are still arguments for the export of recyclable materials to China though, with many arguing that it enables local firms to develop larger factories, achieve more economy of scale, and so increase their efficiency.

So what’s the conclusion? Is recycling a scam or the real deal? Well the reality is that recycling may be imperfect, but it is still very much a move in the right direction and an important cause to get behind. As it is, recycling is doing a lot of good, and once we have perfected it this will only improve. More products need to be designed with recycling in mind from the start, and more regulations and better systems need to be put in place to ensure that we make the most of the materials that come back. Recycling though as a whole is here to stay, and you should get behind it 100%.