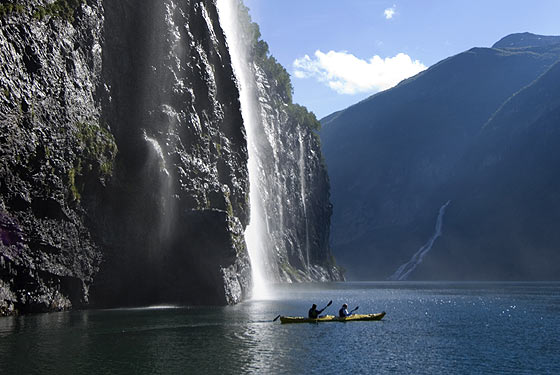 Going green is something that everyone needs to make an effort toward but that really has the biggest impact when it’s on a national scale. While you and I might both have our personal carbon footprints, countries like the US, China and Great Britain have footprints that are millions of times bigger and that really have a direct impact on the environment. While we all must do our bit then, it’s wider attitudes, lifestyles and policies that will really shape the future of our planet.

When it comes to national ecoconsciousness though, not every country is made equally. Some countries are definitely more environmentally friendly than others and while populations of course have some bearing (the countries with larger populations – such as China – will of course have bigger footprints), it’s still clear that some countries make more of an ‘effort’ than others when it comes to protecting the environment and minimising emissions. Here we will look at which countries care most and which countries we should try to emulate.

The Most Eco-Friendly Countries in the World

Iceland is one of the most environmentally conscious countries on the planet and is well known for fully embracing renewable power. It helps rather that the country’s natural landscape is gifted with rich geothermal resources and rivers with powerful currents for hydroelectricity.

Norway is another country blessed with abundant natural beauty and this is something that is guarded well by the public policy. It makes good sense from both an environmental and an economic point of view for Norway to protect the national parks and dramatic scenery that brings in so many tourists.

Switzerland is well known for a variety of green policies and efforts but deserves particular praise for focussing so heavily on keeping the environment clean. They have strict policies with regards to littering and pollution and that’s part of the reason that they export so much mineral water – it’s kept perfectly pristine. Looking around the mountains in Switzerland you can tell this is a country filled with natural beauty and they have done a great job to maintain that.

Costa Rica has many rainforest conservation programs meaning that a lot of their trees and wildlife are protected. With rainforests dwindling and trees so important for converting damaging carbon dioxide back into vital oxygen, this is a very important and worthwhile pursuit. More than 27% of Costa Rica’s land is protected making it home to the world’s biggest ‘natural conservation area’.

France seems to put a lot of other countries and politicians ill at ease with what has been described as ‘eco snobbery’. Either way though, this has benefited their countryside and also inspired a lot of the rest of Europe by encouraging green policies. France is also largely powered by nuclear energy. Though this creates waste of its own and is potentially dangerous, it doesn’t create any carbon emissions giving the country a smaller carbon footprint than many.

Tokelau is a small nation in the South Pacific but its support for environmentalism is anything but small. An independent territory of New Zealand, Tokelau is the first nation to be 100% dependent on solar power.

Like Switzerland and Norway, Austria is another country filled with natural beauty and impressive mountain views. Cleanliness is one incredibly important to the fabric of Austrian culture and policy backs this up in a number of ways.

Colombia is one of the most fuel efficient in the world for mass transit which you might not expect from a country that has gone through such difficulties in the past.

Mauritius is a beautiful island that is just off the coast of the Indian Ocean and that used to provide a home for the famous extinct Dodo. Mauritius now has a ‘Ministry of Environment’ to stay on top of the island’s environmentalism which, among other things, enforces a very strict anti-litter policy.

There are many things that make Sweden such a good choice for this list. Not only is it another beautiful country filled with amazing mountain views but it is also home to a number of clean energy sources and very green public transport solutions. Sweden is also one of the best countries for health care, making it a generally a great place for overall quality of life.

In a Survey carried out by Readers’ Digest, Finland was found to be the most eco-friendly country in the world (Ethiopia came last), winning points for its impressive air and water quality and some of its policies geared toward environmental health.

In the same survey, four German cities were rates as some of the greenest, specifically Munich, Frankfurt and Stuttgart. Germany is well known for having a long-standing commitment to the environment but it seems the country manages this in some regions better than others.

So what does all this show us? Well for one it shows us that it’s certainly immensely possible to run a country in an environmentally friendly way. It also shows us that investing in the environment is a smart move and one that will pay off in dividends by improving health and increasing exports and tourism. That said, even the most environmentally countries still have ways to go – Finland for instance has a high energy footprint. The important thing is that we learn from our neighbours and that we all pull together to ensure a good fate for the planet.