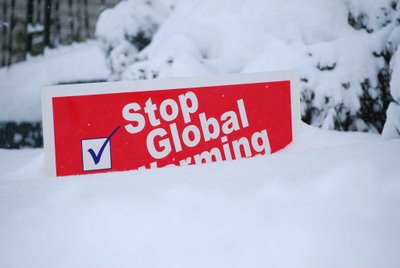 When I was little my Mum used to tell me stories about the bogey man and how he would punish children who were badly behaved. He prowled the area at night, so my best bet was to go to bed early and to be well behaved during the day to ensure that he didn’t have any bones to pick with me (literally) when darkness fell.                My Mother enjoyed a peaceful 18 years as I lived in constant abject terror before finally leaving home and moving out, and I imagine many parents have used something similar to inspire good behaviour in their children – even if they do pick slightly less scarring imagery.

But what’s interesting is that sometimes I suspect the government of using these kinds of techniques too. Of playing up the dangers we face as a society so that we’ll behave better. Could global warming be just another bogeyman designed to inspire good behaviour and get us to turn out the lights? Or, if you ignore the slightly conspiratorial accusation that the government is purposefully hyping up the dangers of global warming, could it just be a misunderstanding? A concern that grew out of control and took on a life of its own?

If you believe many global warming conspiracy theorists then the answer is yes, and actually there is some compelling evidence out there that suggests global warming may not be all it’s hyped up to be. Here we will look at some reasons we have for doubting the reality of global warming.

Global Warming Happens Naturally: If you look at the history of our planet, then the climate has never been something that remains static and in fact it’s natural for it to ‘cycle’. Head back to the age of the Dinosaurs and the planet was actually much warmer than it is now, while of course the opposite is true of the aptly named ‘ice age’. Even in human history, the climate was different enough during the time of the Vikings that they were able at the time to farm on Greenland in ways that wouldn’t be possible today. With gasses produced by cows creating more damage than the CO2 from cars, and with carbon gasses being created naturally by the decomposition of organic matter, are we mere humans significant at all when it comes to climate change? This isn’t just something that the sceptics are shouting about either – as recently a petition circulated by the Oregon Institute of Science and Medicine that stated there was no evidence for the impact of human-released gasses was signed by over 17,000 researchers.

We Can’t Stop It: And if this is the case and climate change really is part of a natural cycle, then what can we really do to slow it down? With the ice caps already melting – and what with them being responsible for reflecting 90% of the sun’s rays back into space – is it already too late?

Global Warming May Have ‘Stabilized’: According to a recent report from the Research Council of Norway, global warming could be ‘less extreme’ than feared. While the temperature of the planet climbed rapidly throughout the 90s, this increase has now seemingly levelled off as is also true of ocean temperatures.

The lead researcher from the study, one Terje Bernsten, suggested that what was observed in the 90s was a ‘natural fluctuation’ in the climate system, and that this could have resulted in our overestimating the problem.

Satellite Readings Don’t Agree: There is also concern over the fact that satellite readings and weather balloons don’t show any signs of global warming and that the only measures that do are land based and so more subject to confounding factors (such as the heat generated by urban developments).

If you’re starting to question the validity of global warming then hold your horses – as there are flaws in these arguments too. For instance, despite those 17,000 signatures, 97% of the scientific community still agrees that humans are at least partly responsible for global warming. And no matter what the satellites and weather balloons say we can see the ice caps melting with our own eyes. As for stabilization, it’s worth noting that last decade was the hottest on record (though quick maths should tell you that doesn’t actually disprove the stabilization theory). Oh and the cows? Well they’re our fault too – it’s farming that causes the problem and 9% of all CO2 emissions come from burning fuel to produce fertilizer/grow feed for livestock.

At the end of the day, whatever our contribution to global warming we should still be actively looking for ways to reduce the problem. And even if it’s too late to slow down the melting of the ice caps and we’re powerless to prevent this natural cycle by cutting emissions, that doesn’t mean we should completely stop trying. There are many other options open to us still from transhuman solutions to eco-engineering (building giant satellites to reflect more sun back out into space etc.).

So what’s the take home message here? It’s simply that the argument is far from black and white, and that we need to look at both sides of the debate in order to have a complete picture regarding what we’re dealing with. Arguing about which side is ‘right’ meanwhile isn’t going to help anyone…