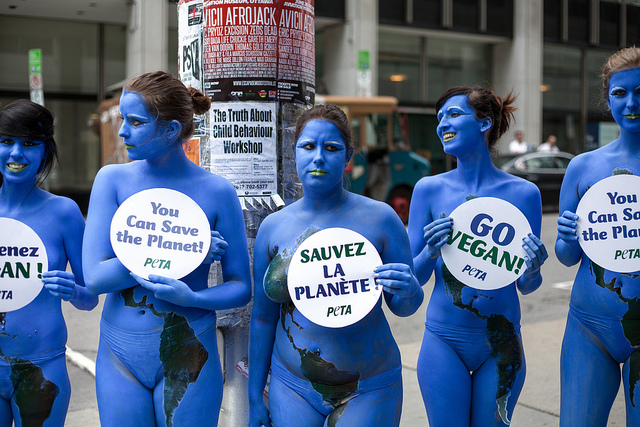 When it comes to maintaining the planet, its climate and its ecosystems, wild animals play a hugely important role. One of the main reasons that deforestation and rising acidity in the oceans are such terrible phenomena is that it leads to the death of millions of species of animals. These animals are crucial not only due to sanctity of life, but also because the many important roles they play – helping to spread seeds to help trees grow, providing us with food and helping to maintain other aspects of the environment. In short, being eco-friendly doesn’t just mean saving trees, it also means protecting animals in their natural habitat.

So with that in mind, why don’t we all just go vegan and stop killing animals for food? Surely we could save a whole bunch that way, and surely it would also be good for the environment? Well actually it’s not quite that simple… Let’s take a look at what would really happen if we were to completely give up eating meat as a species.

If we were to stop eating meat and animal products completely there would be at least some positive benefits for the environment. Surprisingly this wouldn’t have much to do with saving wild animals – our diet actually has very little to do with those species on the endangered list. How often do you eat Bengal tiger?

The main animals that would be saved if we were to go vegan then would be farm animals – if we all went vegan then we’d all stop eating cows, sheep and chickens. Of course that wouldn’t have a direct impact on wild populations either as most of these animals would have been be bred to be eaten and raised in captivity, but what it would affect would be the land used for farming and the food grown for farm animals. Famers actually have a huge environmental footprint due to the amount of wheat they have to grow and the impact they have on such large areas of land – and we could save a huge amount of energy if we didn’t need to farm. In theory anyway… If nothing else there would be a lot less methane produced by cows which is a large contributor to global warming.

The Problem With Our Diet

This is only theoretical of course because if we weren’t able to eat meat we’d have to eat a lot more carbohydrates. Rather than reducing farmland then we might actually see farmland increase but simply change in nature as more wheat and crops would be grown for humans. This would take up a huge amount of space and would have mixed effects on the environment. There would be even more land use for instance (which equates to deforestation and a change in the way that the ground absorbs/reflects light and heat) and tractors and other machinery would use a lot of energy. You’d almost certainly have to start using more GM crops and synthetic fertilizers to sustain this kind of growth, and the effects of that on such a large scale would also be uncertain.

More to the point though, going vegan would result in a lot more health problems and potentially even a decrease in IQ. This is going to upset a lot of vegetarians out there, but some scientists believe that we started eating more meat around the same time that we started using tools and developing our higher-order functions. Vitamin B12, some essential fatty acids and a range of amino acids are very important for brain function and aren’t readily available from vegan sources (B12 is not naturally available from any plant sources, while no plant sources have a complete or easily accessible amino acid profile).

Amino acids are also incredibly important for muscle and tissue health and that’s why bodybuilders try to eat extra meat. The best source of amino acids that vegans can eat is soy bean, but unfortunately while this includes all the amino acids you need, they are in a less useable form meaning that they are less ‘bioavailable’. In short, if we all turned vegan we’d be more likely to become unhealthy and we’d all be a little weaker thanks to the lack of protein, we’d have to eat a ton of carbs, and we’d all need to supplement with B12 and multivitamins.

If we all went vegan the presumption is that we would also shun other animal-made products which would have to include things such as leather and clothes meaning the interior of our cars and our furniture and clothes would be very different. What you also may not be aware of is that animal meat goes into some surprising foods that you might not expect – such as marshmallows and pretty much any ‘rubbery’ sweet. Likewise there’d be no milk and no cheese other than vegan alternatives (interesting to think if we’d all started off vegan, we’d have never thought to create ‘vegetarian’ milk…). Again this still wouldn’t really have any impact on endangered species or the environment, because these things still come from animals bred in captivity.

While most of the animals that we eat come from farms, we do fish for an awful lot of our food and this would surely have a big impact on the populations of the ocean. This would balance out just as it has done in the past, and of course some animals that we don’t eat – such as dolphins – would also benefit. Overpopulation probably wouldn’t be a huge problem, as the predators would grow larger and in number to keep the levels of smaller fish normal – this would of course potentially mean a rise in shark attacks for humans…

What this would do though is to effect the economy as many small villages that rely on exporting fish would struggle. Likewise the farming industry and many others would suffer, while pharmaceutical companies selling their supplements would thrive.

So ultimately the answer is that we would not benefit from all going vegan. In fact the animal populations would largely remain the same, we’d just see a rise of carnivorous fish, huge growth in the pharmaceutical industry, strain on the economy and poorer health all round…