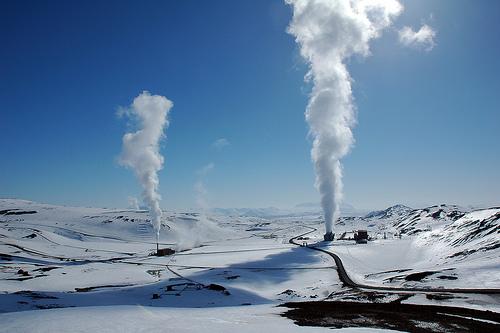 There are countless alternative energy sources that you can use around your home and that are used in more commercial and industrial areas, but not all of them are familiar to us. We all know about solar energy for instance and this is essentially ‘going green 101’. However if you’ve never heard of geothermal energy then you are not alone, though this is an interesting avenue to look into for certain solutions.

Geothermal energy is in fact a close relation of solar energy. This is because it actually is powered by the sun – only indirectly. This works on the premise that the sun gradually heats up the Earth over time, and the fact that soil is a great insulator. This then means that there is a whole lot of untapped energy just waiting in the earth itself for anyone interested in going green and letting it out.

Of course the surface of the ground changes temperature all the time and is cooled by the wind, and so it would be no good trying to get energy from that (most of the time if you touch it it feels very cold). However deeper in the ground the temperature is much warmer and much more constant. This is where we are interested in getting our energy from.

As such, those who want to go green at home and find alternative sources of energy, can tap into that geothermal energy by running a series of pipes through their ground. These pipes will be buried deep below the surface to where the temperature is constant, and they will then have water run through them. As the water passes through, it will then be heated up by the surrounding geothermal energy and that will mean it comes out hot – and there’s your free energy.

Those interested in going green then can use this geothermal energy to heat their homes, their swimming pools or their sheds, and this will be completely free as you will literally just be warming the water up by running it around in your ground. The question you might be asking then is why isn’t everybody doing it?

This is a fair question, and unfortunately there are indeed some drawbacks to using geothermal energy to go green. The first is that you need a large amount of space through which to run the pipes for it to be effective and this means you need a lot of land – many people simply won’t have big enough gardens to use this particular method of going green. At the same time this land needs to be dug up so that the pipes can be installed and this represents a large undertaking and a large expense. This really is a significant investment. And unfortunately it won’t change the world either as geothermal energy is only enough to warm the water up, and couldn’t be used to power electric grids etc.

Thus we are still on the look out for that source of alternative energy that will be a game changer, and it’s not suitable for everyone. However for those who have enough land, like going green and want a guaranteed source of heat, geothermal energy is certainly worth looking into.