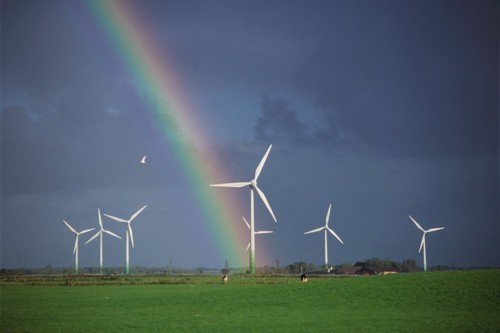 A wind turbine is a device that harvests wind energy to be converted into electricity for a power grid. Because this is a natural, clean and ‘renewable’ energy source that doesn’t rely on burning fossil fuels, it is a great way for areas to go green and to reduce costs and emissions.

If you’ve ever gone on long journeys through the country side, then chances are that you will likely have seen wind turbines at work. They essentially look like huge windmills that are more narrow and much taller and that tend to be out in open fields in large numbers. But how can these wind-mill type structures help us go green? And how can they turn the very wind around us into usable electric energy? Here we will look at the answers to those questions and how wind turbines work their magic.

Basically wind contains kinetic energy because it is created by lots of fast moving air particles. These particles exist because after the sun heats the earth, this causes the air touching the ground to heat up and so rise (hot air is lighter than warm air because it has higher pressure). This then pushes all the air upwards, but leaves a partial vacuum underneath – causing the cooler air to then swap positions and rush underneath to fill those pockets. In fact then, wind energy is a form of indirect solar energy – the sun being responsible for most of our strategies to go green.

These particles then rush around charged with energy, and when they strike the rotor blades of a wind turbine it causes those blades to rotate. This then means that the kinetic energy has now been passed to the wind turbines. As the rotors turn they then turn a gear box and that means that the power is stepped up a notch so that the gears are turning faster and more powerfully than the large rotor blades which will be very large but moving very slowly. This process is the same as the gears on a bike.

From here, the gears then power a generator which converts kinetic energy into electrical energy and which allows us to use it to go green. This works essentially by spinning a conductor (normally a coiled wire) between two magnets which generates an electric current (usually direct current or DC) via a process known as ‘electromagnetic induction’.

This current is then converted to ‘AC’ or ‘Alternating Current’ making it compatible with most home appliances, and then stored at a power station to be sold to homes as necessary.