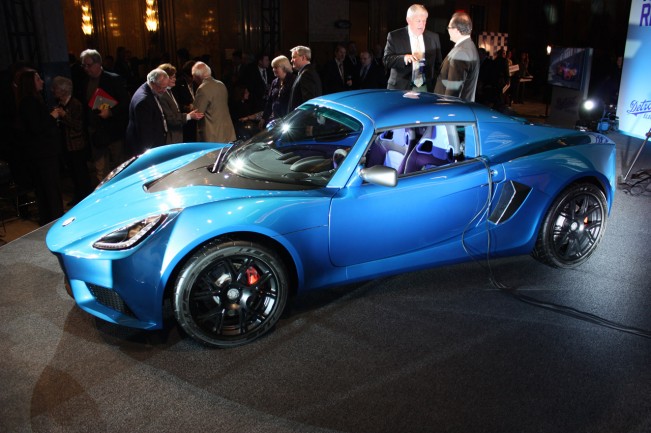 The SP:01 was unveiled recently at the Shanghai Motor Show with impressive specs that make it the fastest electric car in the world. With a beautifully sleek chassis and some real horse power at last, this could finally be a car to make electric vehicles sexy and desirable and to help encourage more people to adopt greener means of travel. Let’s take a closer look at the story…

The SP:01 is manufactured in the US and comes from a company called ‘Detroit Electric’. The car is a limited edition, two seat sports car that looks great in an electric blue. In terms of design, it arguably is closest to the Lotus Elise and in terms of speed it will be capable of 155mph and 0-62mph in 3.7 seconds. But will motorheads be okay to ditch the familiar roar of a petrol engine in favour of the silent-but-deadly electric? Either way, if you want one be prepared to dig deep as the vehicle starts at £135,000.

Why the Shanghai Motor Show?

As well as unleashing the world’s fastest electric car, Detroit Electric also claim to be responsible for the world’s first electric car in 1907. Despite being an American company however, it was in China that the company revealed the new model, which is due to the large investment that the country has recently been making in green travel. As one of the world’s most populous nation and with record levels of pollution, China is committing itself to major investment in electric vehicles. In fact China plans to have five million electric vehicles on its roads by 2020 and this has resulted in something of a gold rush for the industry with manufacturers rushing to bring better electronic vehicles to the market.

As Albert Lam, who is the chief executive at Detroit Electric, put it:

‘I think China has the right policy, right incentive, and the right drive from the government, and China really does need some solution with their air pollution’. Could China go from a green-nightmare (they recently reached 40 times the safe limit for pollution) to leading the way for electric vehicles? If the SP:01 is any indication, then just maybe.

What it Means for the Electric Car Industry

Other hybrids and electric vehicles have likewise been flocking to China for unveilings. The Porsche Panamera S E-Hybrid has been very popular recently for instance after being revealed in Shanghai, while Rover (now owned by the Chinese SAIC) has also been showing off a new electric machine.

Prior to the SP:01, the only electric sports car worth mentioning was the Tesla Model S, which Tesla described as their ‘Model Plus’ option. Now motor heads looking for a high-performance electric car have options though, and this kind of competition can only be good for the industry (the Model S is significantly cheaper at $57,000). Combined with Tesla’s plans to roll out electric refuelling stations around the world and we might just see the promise of electric cars finally take flight..