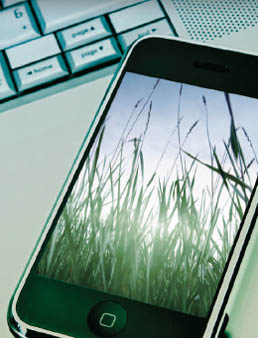 So you have an all singing all dancing smartphone, perhaps an Android or an iPhone, and right now it’s probably your pride and joy. You’re probably using it every two minutes to get as much enjoyment out of it as possible, and as a result you’re probably guzzling the battery like you wouldn’t believe.

Unfortunately our dependence on technology is currently a drain on the environment and one of the many obstacles we have to overcome when trying to go green. Until we start using a different form of power en-masse this is unfortunately going to be the case for many of our devices but that doesn’t mean you can’t be smart with how you use them and save a lot of energy as a result. This is particularly true of using phones, so here we will look at some methods you can use to save energy with your mobile.

Elsewhere on this site you will be able to find a piece on solar USB chargers and these are compatible with many phones. This is a great way to go green and to avoid having to charge from the mains and using this is the first way you can avoid using up as much energy. However you probably won’t always want to use this charger as it can be slow to charge in low light and only gives you an 80% boost in most cases.

That said what you still mustn’t do if you want to go green with your phone use is to charge your phone overnight. Most people believe that plugging their phone in and leaving it over night won’t cost them any energy because it will stop when the phone charges fully. This is in fact not true however, and your phone will keep being ‘topped up’ throughout the night as it uses charge to check for texts and to keep the time etc. In other words you’re using the mains power all night if you leave it plugged in – and even more shocking is the fact that your power chord on its own can use power when plugged in too. So if you want to go green, unplug the whole thing and plug it in only when you need to charge it. Do this by charging when you get home so you have a full night’s worth of battery, and then charging again in the morning while you get ready.

Of course the less you charge your phone the more you can claim to go green. This means you should avoid using the phone more than necessary and in particular you should avoid using the energy-guzzling features on there. While you will need to use certain features – Angry Birds on the train to work for instance – by turning off certain services that run in the background you can save power. iPhone now comes with a ‘task manager’ that lets you kill programs that run in the background and this can help you to go green with your phone; and similar apps can be downloaded from the Android market. Likewise in settings on both systems there are some things you can turn off. For instance do you need Bluetooth on? Do you need your GPS on when you’re not using Google Maps? Do you need 3G even when you’re on the train? Turning the screen brightness down too will save you a lot.

So in other words think about how to use your phone efficiently and this will help you a lot in your bid to go green. It’s a small change, but it can make a big difference.