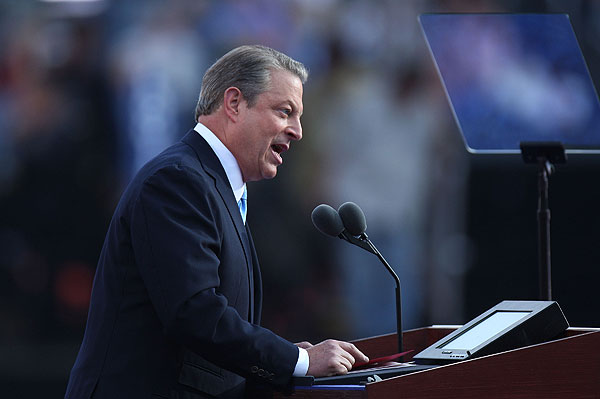 Al Gore is a former Vice President of the United States who has since become a well known environmental activist who is particularly famous for his views on Global Warming and his 2006 documentary film An Inconvenient Truth. The film followed Al Gore’s attempt to educate the American public about Global Warming through the use of a comprehensive slide show. The film, especially for a documentary, was a critical and box-office success and won 2 Academy Awards. It is the 6th highest grossing documentary film in the US.

Al Gore’s global warming views as communicated in the documentary of course take the view that global warming is a real and possibly catastrophic threat of human origin. Throughout the film he presents evidence of this thesis such as the Keeling curve showing CO2 measurements from the Mauna Loa Observatory, the retreat of the glaciers in before and after photography, temperature records dating back to 1880, and a survey of 928 scientific articles and studies on climate change. This data is generally understood to be accurate, and 19 climate scientists when questioned by the Associated Press supported Al Gore’s views. Contention however exists surrounding Al Gore’s global warming views regarding the portrayal of hurricanes as being a result of global warming which has not yet been proven. Meanwhile other skeptics point to the fact that some other causes of global warming may be underplayed. For instance it is believed by many scientists that global warming is part of a natural cycle, and that patterns of CO2 changes are highly complex and a result of factors such as normal alterations in the Earth’s orbital geometry which warm the Earth’s Southern oceans creating more CO2 emissions. Inaccuracies in the data lead eventually to a British court case in 2007 which ruled that the film could only be shown to school children if guidance notes were given to the parents to balance a perceived one-sided argument. The judge also said however that he had ‘no doubt’ that the main hypotheses postulated therein were ‘broadly accurate’. Vegetarian groups meanwhile have criticized the documentary for not openly advocating vegetarianism as a step to reduce our carbon footprints.

Al Gore’s global warming goes further than just the documentary however, and he has been involved in environmental issues since 1976. In 2004 he helped to launch the Generation Investment Management and serves as Chair, He also founded the Alliance for Climate Protection, and the We Campaign. He has helped to organize Live Earth benefit concerts and is a regular speaker on the subject.

However Al Gore’s global warming has also come under criticism. He has been accused of being a ‘carbon billionaire’ for instance, as he is believed to have profited quite greatly from advocating green politics. Some criticize him of having a conflict of interests, or of hypocrisy. These criticisms stem from the fact that he has made investments in green technologies, and the fact that he has an above-average energy consumption and uses private jets and multiple homes. As someone who promotes green living, his own carbon footprint is rather large – though a spokesperson fro Gore reported that he uses renewable energy for many of his bills and that his homes have been retrofitted to make them more energy efficient.