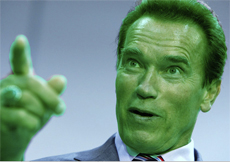 Arnold Schwarzenegger was a controversial politician at the best of times, and recent revelations of adultery have unfortunately cast something of an unsavory shadow over his political legacy. However what many people don’t know about the Austrian Oak is that he is a champion for going green, and a strong advocate of environmentally friendly policies.

It is perhaps fitting that the man who once played Mr Freeze should be interested in tackling global warming, and throughout his term as governor Arnie demonstrated that this was indeed the case. This was clear in September 2006, when the Governator signed a bill that capped the greenhouse gas emissions in California – the first of its kind in the US. This law set regulations on the emissions allowed by utilities, manufacturing plants and refineries – which of course helped not only California’s bid to go green, but also other states to follow suit. Later Arnold would sign a global warming bill which prohibited large utilities and corporations from making contracts with suppliers that did not meet  the state emission standards. Both of these bills were part of a larger ambition to cut emissions in California by 25% over thirty years, and 80% over 60 years.

These weren’t the only times Arnie would go green while serving as governor however. He also signed an order in 2006 allowing California to work alongside the Northeast’s Regional Greenhouse Gas Initiative – which meant each power plant would be awarded a finite number of ‘carbon credits’ to ‘spend’. During his time as governor, he also introduced the first ever state-wide green building code and the first statewide fuel-efficiency standards.

Arnie has also demonstrated his interest in going green by taking steps around his own home – including the adaptation of one his famous Hummers; one now runs on hydrogen while another runs on biofuels. He also uses solar panels to heat his own home.

Since leaving his position as Governor, Schwarzenegger has given several talks on going green and has expressed an interest in promoting green technologies and policies on a global scale. His message is that going green needn’t mean compromise – that we can still drive big cars and enjoy a booming economy while being conscious of the environment at the same time; and in fact that we can enjoy a more decadent lifestyle and attract more thriving new businesses to the economy as a result.