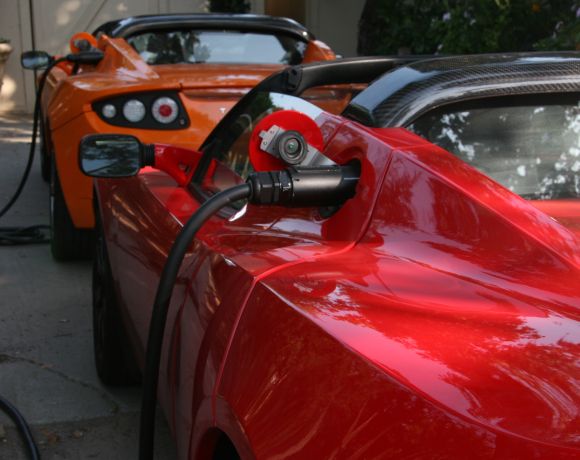 The idea of green transport using electric cars is one that may for a long time have seemed like a pipe dream. While the concept of driving with completely clean energy and not having to spend tons on petrol to get around might sound idyllic, the reality hasn’t really lived up to the hope. Not only have electric cars historically been very expensive, but they weren’t exactly desirable to look at or fun to drive either – and then there was the complete lack of infrastructure for fueling up…

Well that’s all changing now and finally the future green cars are starting to show promise. The future is bright – bright green…

Tesla Motors are at the forefront of electric cars and in the last few years have made both highly desirable electric motors (the Roadster) and affordable commercial models (the Model S).

This now means that you can realistically afford one of these future green cars, but also that you can enjoy driving them and being seen driving them. And now Tesla are looking to rectify the last remaining problem – the infrastructure.

By infrastructure I of course mean the lack of places to refuel, but with the Tesla Supercharger Network revealed at the Tesla event in September this looks set to change. These are essentially recharging points that will allow you to recharge your car on the move in approximately 30 minutes – time that Tesla anticipate users will spend grabbing lunch.

These stations use solar energy meaning it’s completely clean and in those thirty minutes you’ll get around three hours’ worth of use (100 kilowatts) if you’re driving a Model S. Even better, the stations will put more energy back into the grid as they’re used, meaning that in future green cars could actually be good for our environment.

The Superchargers already exist in six locations across California, and over the remainder of the year Tesla intend to add more superchargers to other high traffic corridors of the US before they begin the invasion in Europe and Asia. Green cars: a pipe dream no longer?